Video – Benji Joya debuts and Scores for the Chicago Fire

Last week Chicago Fire newbie Benji Joya spoke about what it would mean to make his club debut in front of his family in his home state of California Sunday vs. Chivas USA.

He probably didn’t imagine that he’d score on his first touch though.

After a drab first half ended 0-0, the Fire found themselves down 2-0 with goals a pair of Chivas USA goals inside the hour mark.

Shortly after the second goal, Joya entered the match for Patrick Nyarko as the team’s second substitute in the 63rd minute. Literally seconds later, he found himself at the back post, tucking in an Alex shot that Chivas ‘keeper Dan Kennedy could only get a hand to, to make things 2-1 in the 64th minute.

“All this week, all I’ve been putting in my mind is to hopefully get the debut and get a goal and get my name on the score sheet,” Joya told reporters post-game. “Luckily the first touch I had today it turned into a goal, so I’m really proud of that.”

With momentum on their side, it seemed like the team would push for a third goal with MLS MVP Mike Magee still available on the bench. Fire head coach Frank Yallop said following the match that Chris Rolfe began cramping and so Logan Pause was used as the final substitute for him in the 75th minute.

The Fire manager also said that Magee’s hamstring, which had been an earlier issue for the Chicago native during preseason began to bother him late this week.

“We didn’t want to risk [Mike] in this game,” said Yallop. “Mike was good for maybe 10 minutes but we kind of had to change it a little bit. Mike wanted to be part of it today and I did as well. I didn’t want to risk it and give 25 minutes when he probably only had 10 in him.”

Just as it looked like the Fire would escape with a point, a late header off a corner kick from Bobby Burling gave the team a disappointing 3-2 loss.

Having sparked the comeback only to see it end in defeat, Joya was still positive about the overall effort of the team in the first match of the season.

“Sometimes you come back and at the end you let a little bit go. If we slack, they’re going to come on top. I’m really proud of the effort from the guys and it’s the beginning of the season – we’ve gotta focus on the next game and get the win.” 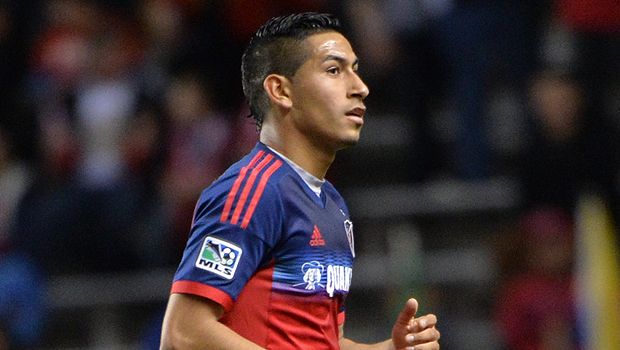